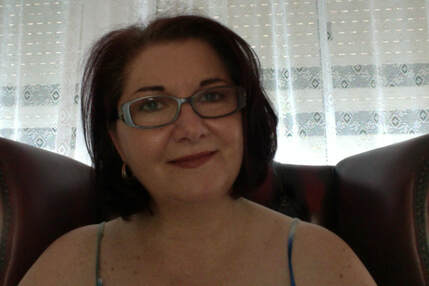 A former ancient historian and archaeologist, Tima Maria Lacoba accidentally smashed a 3,000 year-old Egyptian vase while on her first dig. Her supervisor made her glue it back together again. It took a week. From there she went on to specialise in Late Romano-British archaeology and the military forts along Hadrian's Wall, because buildings don't smash as easily. Now she's combined
her love of history with another passion - storytelling - to create a dark tale of Roman soldiers who've been waiting nearly two-thousand years to be released from an ancient curse.

Tima has always been a storyteller, but it wasn't until five years ago that she seriously ventured into writing. The result was BloodGifted and Laura's Locket.

In 2011 BloodGifted was shortlisted in the Atlas Award and eventually came fourth place.

In 2012 it was listed among the top ten in the Choclit Search for an Aussie Star Contest.

In 2013 Tima was offered a publishing contract but declined in favour of going indie, preferring to be in charge of her own creative work.

In 2017 BloodGifted was nominated for the Golden Stake Award in the International Vampire Film and Arts Festival.

Laura's Locket, BloodGifted, BloodPledge and BloodVault, are the first four books in the Dantonville Legacy Series.
Book 5, BloodWish, is due for release later this year.

She also intends to satisfy her fans' requests by writing individual books on the other characters who feature so prominently. Terens, Cal, Jake and Sam will each have their own story.

Currently, Tima lives on the Central Coast, an hour's drive north of Sydney, in Australia. Between bouts of writing, she can be found in the kitchen baking her favourite chocolate recipes, or in her garden pulling out yet more weeds.  These activities are responsible for forming more gothic, paranormal romance stories in her mind for future books.

Visit our tima-maria-lacoba shelf on Goodreads: