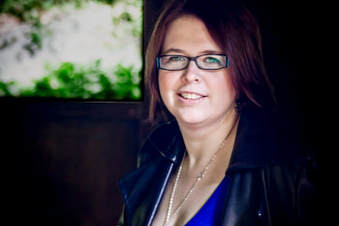 Emma Douglas has read like a wild thing since she was small. She discovered romance novels at an age that way probably way too young but she survived unscathed. When she realized you could make up stories as well as read them, she started taking notes about what the characters wandering through her head were telling her and then, eventually, books happened.

Before the books happened she did the usual things (was a band geek (and a geek generally), had crushes on rock stars and fictional characters, spent chunks of her summers on an island beach, got a degree in something sensible that doesn’t involve writing about kissing, became a black belt in internet procrastination, fell down the rabbit-hole of craft, traveled a bit, indulged her love of baked goods, got bossed around by cats, began a quest for the perfect margarita, and napped to recover from all of the above.

She still does most of that plus the writing thing from a tiny house which her feline overlords have kindly agreed to share with her.


Emma also writes urban fantasy and fantasy romance as M.J. Scott.
You can find her at her website: mjscott.net

Emma also writes contemporary romances as Melanie Scott.
You can find Melanie at her website:  melanie-scott.net

Visit our emma-douglas shelf on Goodreads: